Copies of the Company’s September 30, 2022 unaudited condensed interim consolidated financial statements and management’s discussion and analysis (“MD&A”) filings are being filed with Canadian securities regulatory authorities and will be made available under the Company’s profile at www.sedar.com and on the Company’s website at www.crownpointenergy.com. All dollar figures are expressed in United States dollars (“USD”) unless otherwise stated.  References to “ARS” are to Argentina Pesos.

Consideration was a cash payment of $5 million and up to an additional $7.53 million in quarterly installments based on a percentage of the net operating income (oil and gas sales revenue less royalties, turnover and other taxes and operating expenses) derived from the Company’s 50% working interest in the PPCO Concession (the “Contingent Consideration”), provided that the Contingent Consideration is not payable until the Company has recovered its initial $5 million investment from its share of the net operating income derived from the PPCO Concession.
Under the terms of the exploitation license agreement, the joint venture will pay an 18.2% royalty on oil production and commit to a $26.8 million ($13.4 million net to Crown Point) work program which includes well work overs, infrastructure optimization and a multi-well drilling program that must be fulfilled by August 2028.

Operational update
Tierra del Fuego Concession (“TDF”)
During Q3 2022, San Martin oil production averaged 1,200 (net 413) bbls of oil per day. Completion and flow testing of SM a-1004, drilled in Q1 2022 and located on the western crest of the San Martín high, was carried out between March 22 and May 11. During July and August 2022, the water production in SM a-1004 and SM a-1002 increased considerably, leading to exhaustive testing of the San Martín cluster for further investigation of the reservoir’s behavior and the performance of production tests in SM x-1001 and pressure interference tests in the other wells in the area. In addition, the joint venture tested three zones in SM a-1004 and the well is currently on production with a packer from all opened zones and is awaiting installation of an electro-submergible pump in order to increase gross production in the well.  The Company expects that the pump installation will decrease the water cut in wells other than SM a-1004.
During Q3 2022, natural gas production from the Las Violetas concession averaged 11,514 (net 3,958) mcf per day and oil production averaged 265 (net 91) bbls of oil per day. Drilling operations on the LV-118(h) well, a 700 meter lateral horizontal well located in the northeast corner of the concession spud in during Q1 2022, were halted on May 3, 2022 after an obstruction was encountered in the cased horizontal build section at a depth of 1,720 meters. The re-entry on LV-118(h) performed in August 2022 to determine the causes of obstruction was unsuccessful.

Cerro de Los Leones (“CLL”) Exploration Permit
The directional well, CPE.MdN.VS.xp-3(d), was drilled and cased in Q1 2022 after encountering eight volcanic sills with oil shows and increased mud gas in the Mendoza Group, and log indicated gas bearing zones in the overlying Neuquén Group sandstones.  Subsequent acid stimulation and swabbing of the volcanic sills recovered uneconomic amounts of oil with water. The well has been suspended pending testing of the gas bearing sandstone layers in the Neuquén Group in the first half of 2023.

The Company’s capital spending on developed and producing assets for fiscal 2023 is budgeted at $15.0 million based on expenditures for the following proposed activities:

The Company’s capital spending on exploration and evaluation assets for fiscal 2022 was originally budgeted at $3.3 million to drill and complete one exploration well in CLL of which $2.5 million was incurred during the September 2022 period. The Company plans to spend the remaining $0.8 million on the testing of the gas bearing sandstone layers of the Neuquén Group in the first half of 2023.

Argentina – International Monetary Fund
The International Monetary Fund (“IMF“) approved, at a technical level, the quarterly objectives committed to by Argentina in accordance with the 30-month agreement under an Expanded Fund Facility (“EFF“) for the second and third quarter of 2022 jointly. The approval highlights that the technical staff of the IMF and the Argentine authorities agree that the objectives established in the EFF agreement will remain unchanged until 2023 and the original goals will be maintained until the end of the year. Despite this achievement, the implementation of policies aimed at lowering Argentina’s deficit remains essential to achieve macroeconomic stability and begin to address Argentina’s entrenched challenges, particularly high and persistent inflation. The rate of inflation reached 66% for the September 2022 period, and 83% for the 12 months ended September 30, 2022. 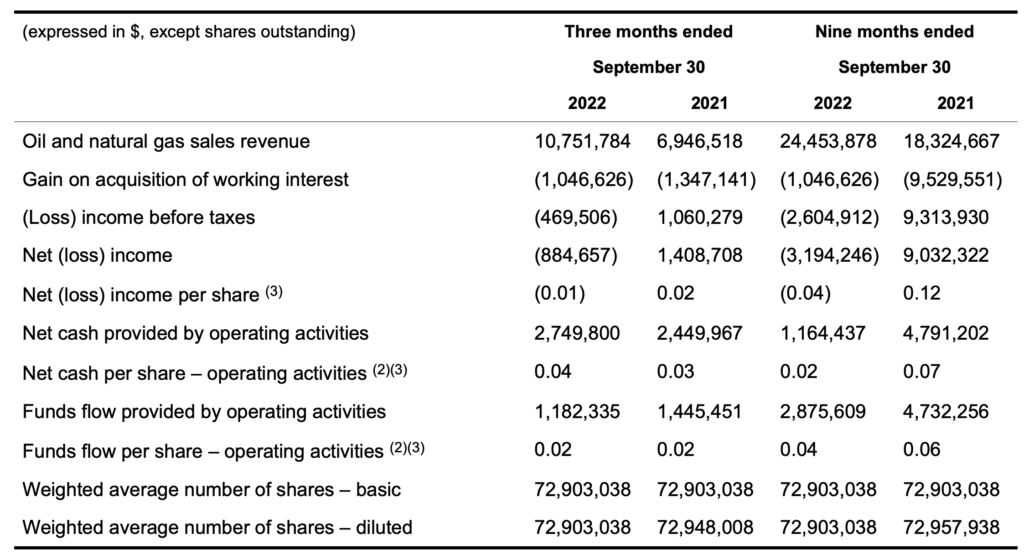 About Crown Point
Crown Point Energy Inc. is an international oil and gas exploration and development company headquartered in Calgary, Canada, incorporated in Canada, trading on the TSX Venture Exchange and operating in Argentina. Crown Point’s exploration and development activities are focused in three producing basins in Argentina, the Austral basin in the province of Tierra del Fuego, and the Neuquén and Cuyo (or Cuyana) basins in the province of Mendoza. Crown Point has a strategy that focuses on establishing a portfolio of producing properties, plus production enhancement and exploration opportunities to provide a basis for future growth.

This website uses cookies to improve your experience while you navigate through the website. Out of these cookies, the cookies that are categorized as necessary are stored on your browser as they are essential for the working of basic functionalities of the website. We also use third-party cookies that help us analyze and understand how you use this website. These cookies will be stored in your browser only with your consent. You also have the option to opt-out of these cookies. But opting out of some of these cookies may have an effect on your browsing experience.
Necessary Always Enabled
Necessary cookies are absolutely essential for the website to function properly. This category only includes cookies that ensures basic functionalities and security features of the website. These cookies do not store any personal information.
Non-necessary
Any cookies that may not be particularly necessary for the website to function and is used specifically to collect user personal data via analytics, ads, other embedded contents are termed as non-necessary cookies. It is mandatory to procure user consent prior to running these cookies on your website.
SAVE & ACCEPT