TSX-V:  CWV: Crown Point Energy Inc. (“Crown Point”, the “Company”, “we” or “our“) today announced certain reserve information for the year ended December 31, 2021.  All dollar figures are expressed in United States dollars (“USD” or “US$“) unless otherwise stated, and “MMUS$” means millions of USD.

McDaniel & Associates Consultants Ltd. (“McDaniel”), an independent qualified reserves evaluator, evaluated the oil and natural gas reserves attributable to all of Crown Point’s properties as at December 31, 2021 based on forecast prices and costs and in accordance with National Instrument 51-101 (“NI 51-101“) and the Canadian Oil and Gas Evaluation Handbook (the “COGE Handbook“). McDaniel’s evaluation report (the “McDaniel Report“) also presents the estimated net present value of future net revenue associated with Crown Point’s reserves. A summary of Crown Point’s crude oil, natural gas and natural gas liquids reserves, as evaluated by McDaniel, and the associated net present value of future net revenue associated therewith as at December 31, 2021 is presented below.

The following table presents, in the aggregate, the Company’s gross and net proved and probable reserves, estimated using forecast prices and costs, by product type and by barrel of oil equivalent, as of December 31, 2021.

The following table discloses, in the aggregate, the net present value of the Company’s future net revenue attributable to the reserves categories in the table above, estimated using forecast prices and costs, before deducting future income tax expenses, and calculated without discount and using discount rates of 5%, 10%, 15% and 20%. 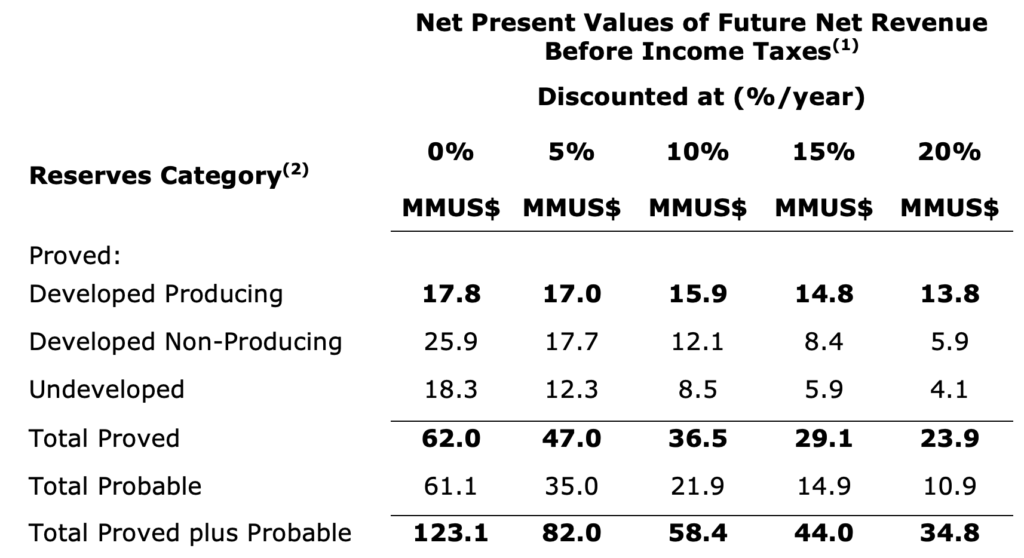 (1) The estimated net present values of future net revenues disclosed do not represent fair market value.
(2) The definitions of the various categories of reserves are those set out in NI 51-101 and the COGE Handbook.

The Company’s proved plus probable (“2P“) reserves (gross) as at December 31, 2021, as evaluated by McDaniel, were 6,922 MBOE compared to 2,247 MBOE as at December 31, 2020.  The more than threefold increase is attributable to: the acquisition in March 2021 of a 50% working interest in the oil producing Chañares Herrados concession in Mendoza Province and better than anticipated gas production from the Tierra del Fuego concessions, which was partially offset by a downward revision of San Martin oil reserves (2P: 96,000 barrels of oil) due to the November 2021 onset of water production in the San Martin a-1002 oil well and the absence of a drilling campaign to replace 2021 oil and gas production.

The estimated before tax net present value of the Company’s 2P reserves as at December 31, 2021 (discounted at 10%) was $58.4 million, compared with $13.9 million as at December 31, 2020. The significant increase in the before tax net present value is attributable to: the aforementioned acquisition of the Chañares Herrados property, improved international oil prices and improved gas prices in the domestic market in Argentina, which were partially offset by the depletion of the Company’s reserves due to production, the downward revision of the San Martin oil reserves and no reserves replacement due to the absence of a drilling program in 2021.

The following table sets forth, for each product type, the pricing assumptions used by McDaniel in estimating the reserves data disclosed herein as at December 31, 2021.

SUMMARY OF PRICING AND INFLATION RATE ASSUMPTIONS
AS OF DECEMBER 31, 2021 (Forecast Prices & Costs)

(1) Forecast pricing for Tierra del Fuego (“TDF“) crude oil is based on the forecast Brent crude oil benchmark reference pricing published by McDaniel, less a discount of US$9.00 per bbl.
(2) Natural gas production from the TDF concessions is sold to consumers in TDF as well as to mainland Argentina, all of which receive different prices as set by sales agreements from time to time. These forecast prices represent a blend of such prices.
(3) Inflation rates used for forecasting costs.
(4) The TDF concessions expire in August 2026 unless extended by agreement with the Province of Tierra del Fuego.
(5) Forecast pricing for Chañares Herrados (“CH”) crude oil is based on the average realized domestic sales price in Q4 2021 escalated at 2% per year thereafter.

Crown Point Energy Inc. is an international oil and gas exploration and development company headquartered in Calgary, Canada, incorporated in Canada, trading on the TSX Venture Exchange and with operations in Argentina. Crown Point’s exploration and development activities are focused in three producing basins in Argentina, the Austral basin in the province of Tierra del Fuego, and the Neuquén and Cuyo basins in the province of Mendoza. Crown Point has a strategy that focuses on establishing a portfolio of producing properties, plus production enhancement and exploration opportunities to provide a basis for future growth.

Barrels of oil equivalent (“BOE“) may be misleading, particularly if used in isolation. A BOE conversion ratio of six thousand cubic feet (6 Mcf) to one barrel (1 bbl) is based on an energy equivalency conversion method primarily applicable at the burner tip and does not represent a value equivalency at the wellhead. In addition, given that the value ratio based on the current price of crude oil in Argentina as compared to the current price of natural gas in Argentina is significantly different from the energy equivalency of 6:1, utilizing a conversion on a 6:1 basis may be misleading as an indication of value.

All future net revenues are estimated using forecast prices arising from the anticipated development and production of our reserves, net of the associated royalties, operating costs, development costs, and abandonment and reclamation costs and are stated prior to provision for interest and general and administrative expenses. Future net revenues have been presented on a before tax basis.

Certain information set forth in this document is considered forward-looking information, and necessarily involves risks and uncertainties, certain of which are beyond Crown Point’s control.  In addition, information relating to reserves is deemed to be forward-looking information, as it involves the implied assessment, based on certain estimates and assumptions, that the reserves described can be economically produced in the future.  Such risks include but are not limited to: the risks that COVID-19 poses to the oil and gas industry generally and our business in particular; risks associated with oil and gas exploration, development, exploitation, production, marketing and transportation, including the risk that the infrastructure on which we rely to produce, transport and sell our products breaks down and requires parts that are not readily available or repairs that cannot be made on a timely basis, and which impair our ability to operate and/or sell our products; risks associated with operating in Argentina, including risks of changing government regulations (including the adoption of, amendments to, or the cancellation of government incentive programs or other laws and regulations relating to commodity prices, taxation, currency controls and export restrictions, in each case that may adversely impact Crown Point), risks that new government initiatives will not have the consequences the Company believes (including the benefits to be derived therefrom), expropriation/nationalization of assets, price controls on commodity prices, inability to enforce contracts in certain circumstances, the potential for a hyperinflationary economic environment, the imposition of currency controls, risks associated with a default on Argentine government debt, and other economic and political risks; volatility of commodity prices; currency fluctuations; imprecision of reserve estimates; environmental risks; competition from other producers; inability to retain drilling services; incorrect assessment of value of acquisitions and failure to realize the benefits therefrom; delays resulting from or inability to obtain required regulatory approvals; the lack of availability of qualified personnel or management; stock market volatility; inability to access sufficient capital from internal and external sources; the need to shut-in, flare and/or curtail production as a result of a lack of infrastructure and/or damage to existing infrastructure; and economic or industry condition changes. Actual results, performance or achievements could differ materially from those expressed in, or implied by, the forward-looking information and, accordingly, no assurance can be given that any events anticipated by the forward-looking information will transpire or occur, or if any of them do so, what benefits that Crown Point will derive therefrom. With respect to forward-looking information contained herein, the Company has made assumptions regarding: the impact that COVID-19 will have on our operations and the length of time that such impact will persist; the impact of increasing competition; the general stability of the economic and political environment in Argentina; the timely receipt of any required regulatory approvals; the ability of the Company to obtain qualified staff, equipment and services in a timely and cost efficient manner; drilling results; the costs of obtaining equipment and personnel to complete the Company’s capital expenditure program; the ability of the operator of the projects which the Company has an interest in to operate the field in a safe, efficient and effective manner; the ability of the Company to obtain financing on acceptable terms when and if needed; the ability of the Company to service its debt repayments when required; field production rates and decline rates; the ability to replace and expand oil and natural gas reserves through acquisition, development and exploration activities; the timing and costs of pipeline, storage, transportation and facility repair, construction and expansion and the ability of the Company to secure adequate product transportation; future oil and natural gas prices; costs of operational activities in Argentina; currency, exchange and interest rates; the regulatory framework regarding royalties, commodity price controls, currency controls, import/export matters, taxes and environmental matters in Argentina; and the ability of the Company to successfully market its oil and natural gas products.  Additional information on these and other factors that could affect Crown Point are included in reports on file with Canadian securities regulatory authorities, including under the heading “Risk Factors” in the Company’s most recent annual information form, and may be accessed through the SEDAR website (www.sedar.com). Furthermore, the forward-looking information contained in this document are made as of the date of this document, and Crown Point does not undertake any obligation to update publicly or to revise any of the included forward looking information, whether as a result of new information, future events or otherwise, except as may be expressly required by applicable securities law.

This website uses cookies to improve your experience while you navigate through the website. Out of these cookies, the cookies that are categorized as necessary are stored on your browser as they are essential for the working of basic functionalities of the website. We also use third-party cookies that help us analyze and understand how you use this website. These cookies will be stored in your browser only with your consent. You also have the option to opt-out of these cookies. But opting out of some of these cookies may have an effect on your browsing experience.
Necessary Always Enabled
Necessary cookies are absolutely essential for the website to function properly. This category only includes cookies that ensures basic functionalities and security features of the website. These cookies do not store any personal information.
Non-necessary
Any cookies that may not be particularly necessary for the website to function and is used specifically to collect user personal data via analytics, ads, other embedded contents are termed as non-necessary cookies. It is mandatory to procure user consent prior to running these cookies on your website.
SAVE & ACCEPT